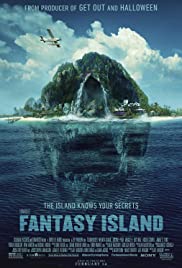 Having not been much of a fan of neither the original show nor the recent (but short lived) remake, the new Fantasy Island (2020) is a different animal altogether.  From producer Jason Blum, among others, comes a new take on an old classic that will be very divisive to fans of the original show while may not interest modern audiences.

A group of “lucky” people are invited for a vacation to Fantasy Island a place that will grant each of the visitors a single wish of their greatest fantasy.  The island is presided over by a Mr. Roarke (Michael Pena) who insurers each people that they only get a single wish and that while they are on the island they must see their fantasy to its natural conclusion, but when each of the visitors’ fantasy turns out to be more real than they realized deeper and darker traumas start to surface which threatens their safety and sometimes their sanity.

Lead by a talented cast that includes Maggie Q, Lucy Hale, Austin Stowell, and Michael Rooker, to name a few, the film suffers not front the cast but from trying to overly complicate the plot to complete absurdity.  Written by Jillian Jacobs, Christopher Roach, and Jeff Wadlow (who also directs) the film tries too hard to link all the characters while also over explaining the mysteries of the island when none of it is necessary.  It’s a compacted story that probably needs three hours to adequately tell that’s been compressed down to a under two hour film for a reason, I can only surmise, is to tell and explain to audiences everything while leaving nothing to the imagination (or possible future films).  This is a disservice as by the third act most of the explanations become ludicrous and you’ve ruined any good will the audience had for the film from the first two acts.
The other problem I had with the film is that I don’t think the film-makers knew what type of film they wanted to make.  The trailers make the film out to be a horror film and for the most part there may be some horror elements contained within but the film comes off more as a dark fantasy and if it had played up those elements more than trying to be a PG-13 horror film then I think it would had been more embraced by general audiences.  The horror filled trailers turned off general audiences and the PG-13 rating probably made horror indifferent.

It’s hard to say this but Pena does a great job as Mr. Roarke and it would have been interesting to see him reprise the role in a much better film but otherwise this is a very forgettable film that had so much potential if handled in a better way.