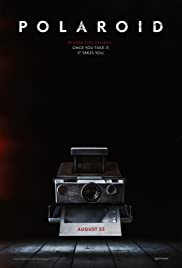 After sitting on the shelf unreleased due to the fiasco that was The Weinstein Company/Dimension Films where it was left without a distributor for some time, the film Polaroid (2019) finally saw the light of day courtesy of Vertical Entertainment.  Written by Blair Butler but based on the short film written and directed by Lars Klevberg (who directs this film), Polaroid is the story of Bird Fitcher (Katheryn Prescott) who’s a little bit of an outcast to her fellow students but she has an eye for photography.  One day, her friend gives her an antique Polaroid camera as a gift.  After she uses the camera to take a photo of her friends, each person in the photo mysteriously starts to die in what appears to be accidents.

Now Bird and her friends have to discover the mystery of the Polaroid camera in order to save themselves while tensions and blame point to Bird who was responsible for taking the photo in the first place.

Polaroid borrows a lot from the film Final Destination (2000) but without the ingenuity and gore as this film comes off as a very pedestrian film hampered by the PG-13 rating.  The CGI monster is barely passable as it lacks originality and the film is filled with pretty bland characters typical of an early ’00 teen horror film.  Prescott is the true standout in the film and not even a supporting performance from Mitch Pileggi (Walter Skinner of The X-Files) can save this film.  It’s pretty basic PG-13 teen horror fare.  Of note is the fact that this film allowed director Klevberg to get hired on the remake of Child’s Play (2019), a much better use of his abilities.