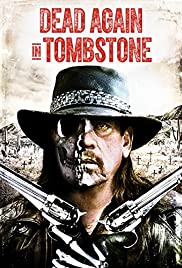 Director Roel Reine returns to director the sequel Dead Again in Tombstone (2017) from the original film which starred Danny Trejo as Guerrero de la Cruz, who makes a deal with the Devil to return to avenge his death in exchange for working with the Devil to return the souls of bad men to Hell.  After the events that ended the previous film Guerrero finds himself going back home to a family that thought him dead and want nothing to do with him.  It’s not long before former soldier Jackson Boomer (Jack Busey) and his men show up looking for an ancient relic that will allow them to make it Hell on Earth.  It just show happens that the relic has been hidden from human eyes by Guerrero’s surviving family members which puts him in the middle of Boomer’s agenda.  Now Guerrero must reunit with his family all the while trying to prevent Hell on Earth.

This mixture of action, horror, and western is actually a good fit for Trejo who seems very at home in this character.  He’s still the bad-ass you’ve come to know in other films (as he pretty much plays the same character in every film he’s in) except he now rides a horse and wears a cowboy hat.  The action scenes are very well composed and edited making for some exiting scenes.  The humor usually falls flat (as Trejo is not as good at delivering the comedic lines) but he has a presence on scene that makes you want to see what he does next no matter how ludicrous the scene (or plot of the film) is.  In fact, I highly doubt that I would’ve even picked up the film if Trejo wasn’t in it.

This film is definitely for the Trejo fans as it offers little else for western or even action fans if you’re not willing to drink the Trejo-Kool-Aid.