The road to recovery has never been as menacing as it is for Michelle (Kaylee DeFer) in the film Darkroom (2013).  Michelle has just gotten a new job recommended by her counselor after having been in rehab recovering from a past trauma.  Upon taking the new job she soon discovers that she’s the prisoner of three psychotic siblings who will teach her how to repent for her past sins even if it kills her. 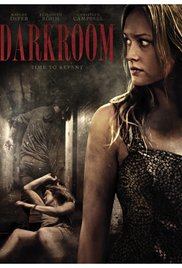 Michelle is forced to undergo intense questioning and torturing before she realizes she is but one of many other women who are also subjected to the siblings’ idea of religious purging and she must find a way to escape before she becomes their next victim.

Written by Britt Napier the film is designed as a lower budget version of Saw (2004) mixed with a little bit of The People Under the Stairs (1991) but is neither as graphic or horrifying or fun and entertaining as those two films (respectfully).  What the film does have going for it is Elisabeth Rohm who plays one of the siblings.  It’s refreshing to see her in a villainous role as I’m so used to seeing her in the hero and good-girl and she does her character well.

The film tries hard to make a point of having the Michelle character overcome her own person and internal demons by externalizing them by trying to save herself and a friend from the torture but it comes at the costs of logic as there is no real logic to some of the character’s motivations as audiences will perceive them as idiotic.  DeFer is a very capable actress who gives Michelle enough of an edge to allow you to oversee the film’s shortcomings.
Posted by Kevin L. Powers at 8:29 AM