Sharks seem to be the go-to monster for a lot of horror films of the last few years and I guess they’ve run out of titles for their films as evidenced by the generic title for the film Shark Week (2012).  The film surprisingly has a couple of decent actors in Yancy Butler and Patrick Bergin who are slumming in this piece of shit of a horror film.

Tiburon and his wife (Bergin and Butler, respectfully) have decided to gather a bunch of people together on their private island in order to force them into a gauntlet infested with sharks of all types.  It seems that they are wanting to punish the people responsible for the death of their son and since Tiburon likes sharks why not just have them get eaten one by one in the most entertaining way as possible.

The CGI is inadequate and the acting isn’t much better but I suggest this is more due to the sub par script by Liz Adams and H. Perry Horton.  The actors, at certain points, are not bad but they are saddled with such a cliché story with bad dialogue that they are simply trying to do the best they can do with what they’ve been given.  Bergin is at his worst in this film as he seems asleep at the wheel in this film (he gave a better performance in the abysmal Lawmower Man 2) but Butler (as always) seems to be the only one having any fun in this mess of a film.

Directed by Christopher Ray very little imagination is set forth and even most of the death scenes are off screen or filmed too dark and even if they weren’t marred by bad CGI this film would be a complete waste of time even for audiences that enjoy bad CGI shark movies. 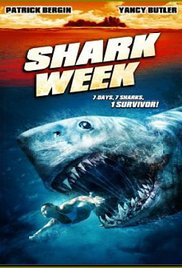