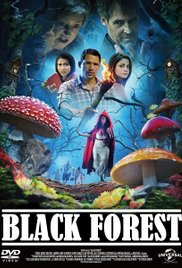 Writer Frank H. Woodward has crafted a very interesting story of fairy-tales coming to life in the film Black Forest (2012).  Ben Cross is Cazmar, a local tourist peddler who takes people into the wild to catch glimpses of fairies and other otherworldly things only most of the tourists never believe him.  On this latest trek he’s assembled a great many people from different backgrounds to go with him including Saxon (Shaffer L’Abidine) who has studied folktales and legends.  Saxon and the unsuspecting tourists get more than they bargained for when one of the members of the group’s newborn baby is stolen by a fairy and they discover that they have crossed over into a fairy-tale land.

They will need to start believing in the unbelievable in order to rescue the baby and figure out how to survive in a world where the fairy tales they’ve grown up with are all out to kill (or eat) them.  Time is running out for the group as a big bad wolf is also hunting them along with all the other creatures that inhabit the strange land.

Not a bad film considering that fairy-tales are kind of old hat but a lot of the success of the film comes from the very capable ensemble cast which work together to help create the fairy-tale world.  There is also a lot of great production design given to the film and even though the werewolf sequences aren’t the best there is plenty of other great sequences in the film that over shadow this.  Cross is at his most menacingly disturbed yet he always seems to be having fun (and in on the joke) making for an entertaining film.  I kind of wished he had been in the film more.

Not a complete time waster but will provide a pretty entertaining night at the movies even if you forget about it the next day.
Posted by Kevin L. Powers at 8:25 AM