For most modern audiences  Lloyd Kaufman’s Toxic Avenger films (four in all) are seen as these campy and outrageous films that can’t possibly be taken seriously because of their unique blend of over the top violence and humor.  Despite all of this the films have remained a pop culture phenomenon as the title character Toxie (as he is known) has appeared in comics and had his own animated series as well as toys and other memorabilia.  It’s not at all surprising that he would get his own musical and Horizon Theatre (Atlanta, Georgia) is the latest theatre to bring the musical to life.

Based on the book and lyrics by Joe Dipietro and music & lyrics by David Bryan, this version of the story finds Melvin Ferd III (Nick Arapoglou) falling for the blind Sarah (Julissa Sabino), who wants nothing to do with him.  When Melvin comes into contact with toxic waste due to a run in with two thugs he is turned into the Toxic Avenger who must battle the evils of Mayor Babs Belgoody (Leslie Bellair) and her henchmen all while getting Sarah to fall in love with him.  The show is a love story of toxic proportions held together by some amazing songs and a very versatile cast.  With toxic waste and other criminal activities taking over Tromaville, Toxie must save his home town before it is too late. 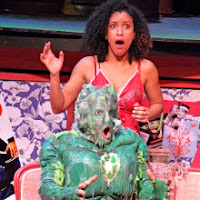 The show is directed by Heidi McKerley with musical direction by S. Renee Clark and they’ve put together a show with a lot of energy and vibrancy.  The material translates (surprisingly) very easily to the musical genre and the entire cast is amazing together.  They have put an excellent cast together to do Kaufman’s creation proud. 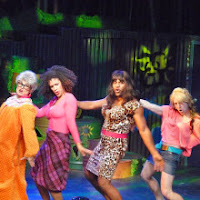 Moriah and Isabel Curley-Clay once again provide another fantastic scenic design as well as are the costume designers.  The set brings to life a small part of Tromaville on two levels including a place on the second level for the live musicians.  Mary Parker provides an equally captivating lighting design that brings Toxic’s vibrant and colorful world to musical life. 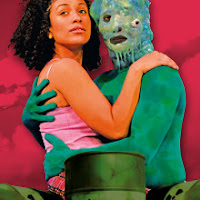 Horizon Theatre constantly takes chances with the musicals that they choose and this is an interesting choice to open their season with.  Several changes have been made to the story for it to translate to the musical and live performance world but these are minor and will not take away from fans of the films.  This is a great show to start the season off and get audiences excited for everything else yet to come.  Whether you’re familiar with The Toxic Avenger or not Horizon Theatre’s production is not one to be missed!

For more info about Horizon Theatre and to purchase tickets you can visit them at www.horizontheatre.com or call them at 404.584.7450.  Photos courtesy of Horizon Theatre.
Posted by Kevin L. Powers at 4:01 PM