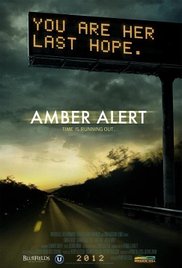 You have to hand to screenwriters Joshua Green and Kerry Bellessa that using the idea of an Amber Alert was a good idea to a low budget suspense thriller especially done in the found footage style as their film Amber Alert (2012) was achieved.  Directed by Bellessa the film follows Samantha Green (Summer Bellesa) who is making a video with her friends when they come across an Amber Alert which describes the car that just so happens to be in front of them.

Samantha refuses to let an innocence kid be abducted and gets emotionally invested in saving the child that may be in grave danger in the vehicle that they are following despite her friends telling her to leave it up to the police.  When they discover that the police are going to do nothing, Samantha decides that it is up to her to help the abducted child no matter what and time is running out as eventually it looks as though everyone has given up finding the child except for her.

Unfortunately, this film like most found footage films is hampered by a plot that’s stretched further than its limit.  This could’ve been a short film but the thin plot plods along the film further than it should creating a film with characters, that unfortunately, are thinly drawn and become caricatures by the end.  Not a very effective film but what can you expect from a found footage film that sells itself on a gimmick.
Posted by Kevin L. Powers at 1:49 PM