I’ve been a fan of the Terminator franchise since the original film The Terminator (1984).  It was a refreshing look at a post-apocalyptic world ruled by robots that took place in the modern world.  Terminator 2: Judgment Day (1991) improved upon the original film and expanded the mythology.  What I love about the films is not just the amazing action sequences but the suspense and thriller aspects as well as the fact that each film was aiming to show audiences things they had never seen before both in terms of story and action.  Neither film was predictable and both were exciting even though the original film had more elements of a horror film verses the more action oriented sequel.

We’ll stop here a moment to take a look at where the franchise went from there which was in the four-color comic book realm with the amazing series The Terminator from NOW Comics published from ’88 to ’90 which told stories about new characters in John Conner’s resistance movement.  NOW Comics also produced the fondly remembered series The Burning Earth before relinquishing the rights to Dark Horse Comics.  Dark Horse Comics produced comics from ’90 to present day giving stories both using characters from the films and branching out to new stories and expanding the mythology from the films unlike the NOW Comics stories which existed for the most part in their own alternate universe.   The comics saw the Terminators battle everyone from Superman, Robocop, Aliens & Predators, and various other characters from other universes.  Other comics from other publishers include Marvel who produced the comic adaptation for the film Terminator 2 while Malibu and Dynamite Comics published sequel comics to the second film.  Beckett Comics did the comics based on the third film Rise of the Machines while IDW Publishing did comics based on the forth film Salvation.  As can be seen, the rights for the films ended up getting split among multiple publishers while the main rights stayed with Dark Horse the longest.

I mention the comics as they are the place where the most freedom for the franchise can be seen.  The stories expand past the main characters of the original film to present a whole world of characters that contribute to the resistance as well as the different types of Terminators developed by Skynet.  This is something that subsequent films have failed to do.

Terminator 3: Rise of the Machines (2003) is, in my opinion, the worst of all the films.  There was nothing in that film that was new to the story or added to the mythology in a major way.  They created a new Terminator which they foreshadowed the way in which she would be killed half way through the film.  The main characters were less interesting and as typical the story revolves around John Conner.  These elements are not as interesting considering that the previous two films had gone a long way in telling all of this info already.  The action sequences are not as innovative and very little suspense is had, which is surprising considering how much suspense and great action sequences director Jonathon Mostow had in his previous films Breakdown (1997) and U-571 (2000).

The forth film Terminator: Salvation (2009) is the first to actually be set in a post-apocalyptic world of the future but it still relies on telling the story of John Conner.  This film introduces a new hybrid human/Terminator in Marcus Wright which many thought odd considering that he was built before the regular Terminators.  I used to agree with this, but the film showcased a lot of different generations of Terminators and (finally) showed the future in all its devastation.  I really enjoyed this film as it wanted to establish more of the mythology while expanding the parameters of what a Terminator film could be.  This film was designed to jump start a new franchise but its lukewarm response killed that idea.

The most recent film Terminator: Genysis (2015) was another attempt to jump start the franchise once again by re-writing events that had come before in previous films and focusing on Sarah Conner (the protagonist of the original film) and Kyle Reese (Sarah’s savior of the original film and father of John Conner).  By re-writing and changing events from the previous films this film was designed as a way to start the franchise over from the beginning (similar to the rebooted Star Trek franchise).  Although there are some interesting concepts to be had in the film it is hampered by poor acting and too many comedic elements designed to appeal to a younger audience.  This is not a good film but not nearly as bad as Rise of the Machines.  This film also received a lukewarm response and the sequel has been shelved for the time being.  I’m sure that there will be another film soon and it will probably try to re-start the franchise again but in my opinion, the only way for this franchise to survive (again) is to just start from a new vantage point with new characters.

For me, it is a shame that the studios are so afraid to try something new with the films and just tell a new and compelling story within the same world.  I may not have liked the film Jurassic World (2015) but there is no denying that they took a chance ditching all the characters from the original trilogy for something new.

What made me stop and take a look at the Terminator franchise is that I just finished reading the Terminator: Salvation – The Final Battle (volumes 1 & 2) which is the sequel to the film.  Considering that the original idea was to craft a new franchise from the film, this story is the closest audiences are going to see what a sequel could have been.  Written by J. Michael Straczynski with artwork by Pete Woods this is a massive twelve part story that explains how the character of Marcus Wright was created and for what purpose including an all new villain that threatens Skynet and the Resistance forcing them into an alliance.  Straczynski manages to make sense of all the elements of the film while also crafting the battle to end all battles.  This is a smart and creative story which jumps time periods but has a whole set of new characters to compliment the John Connor story.  Anyone who enjoyed the Salvation film will enjoy the way it is finished in this story.  In fact, this is one of the best Terminator stories thus far crafted for the comics’ medium.  The Final Battle proves that there is enough story left in the world of the Terminator if writers (and by extension the Studio) are willing to take chances. 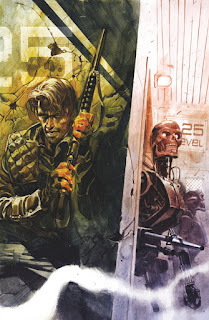 Regardless of whenever the next Terminator film arrives there will always be comics (and novels) that extend the franchise.  The world of the Terminator is rich with so many possibilities that it would be a shame if we fans didn’t have these options.
Posted by Kevin L. Powers at 2:59 PM