Friends on a weekend camping trip fail to abide by the urban legend of holding your breath when you drive by a cemetery and unwillingly unleash the spirit of a serial killer killed at the nearby prison and buried in the cemetery.  Here in lies the basic plot of the film Hold Your Breath (2012).

There’s not much to be said about this by-the-books low budget horror film as the plot follows that of most films that have a group of friends that venture into a place they shouldn’t.  They stop momentarily after passing by the cemetery where they are experiencing car troubles.  They venture into the abandoned prison where they experience some paranormal happenings one of which is that the serial killer that they have raised can switch from person to person so that none of them know who to trust from one moment to the next. 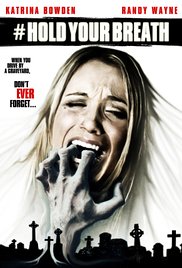 The one thing you have to hand it to the film-makers is that it’s never boring as it has the required sex and violence and gore and is entertaining in a dumb z-movie way.  The story is by Kenny Zinn but the screenplay is written by Geoff Meed and the film is directed by Jared Cohen.  There is nothing in the film that will be new to horror film enthusiasts and you’ll probably forget about this film soon after viewing it.
Posted by Kevin L. Powers at 2:08 PM