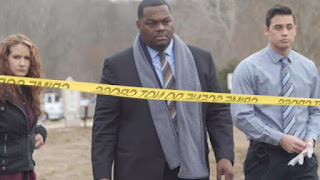 I love to watch web series.  The web series allows film-makers to tell a longer story over shorter lengths of time and if done right a web series can feel just as poignant and emotional as a feature film or standard television series.  Unfortunately, on the other side of that is the fact that many web series seem to have no focus or drive and they tend to meander and go absolutely nowhere.  That is closer to where the web series “Clairvoyance: The Ellis Files” falls.  At the time of this writing I’ve only been able to catch the first three episodes (over thirty minutes) and I’m not sure I will need to see any more.

The show follows a Detective Marissa Ellis (Angelina M. Cortez) who suffers a personal lose (her mother dies) during the murder investigation of woman.  There are a lot (and I do mean a lot) of superfluous other characters that help populate the story but it is with Ellis that the story decides to focus on.  Following the death of her mother, Ellis has been gifted a “second sight” (through a necklace left to her by her mother) and can see things that normal people can’t.

This would actually seem like an interesting concept but it’s all haphazardly strung together with the weakest of twine instead tough and sturdy rope.  The first episode sets up a stalker-killer who abducts a young child whose just looking for a ride home before he is himself killed by the child who turns into something non-human.  We then follow Ellis whose only task in this episode is to go find some uniforms in the basement at which point the episode ends.  The second episode has Ellis finding the uniforms but also coming into contact with a file of a previous case.  Ellis then finds herself at a crime scene of a woman where she is but one of the detectives on the case.  She is quickly sent home to deal with family matters.  She learns that her mother has died and she’s given a necklace with strange powers that allows her to see her boyfriend having an affair with another woman.  In episode three (after kicking her boyfriend to the curb), Ellis finds solace at her partner’s home where she comes clean about what the necklace allowed her to see.  Ellis and her partner then go to the murder victim’s estranged husband to tell him his wife is dead (but he’s having his own affair) and then Ellis is seen looking through the folder she found in the basement at which point the episode ends.

As written the episodes are barely held together by any real story as the whole first episode is a drab episode that hasn’t paid off yet.  You don’t even get a hint of how the stalker-killer who is killed in the first episode connects to everything else nor how the demonic child fits into the story of a detective going through personal issues.  There is no sense that the murder victim from the second episode has anything to do with the first episode nor how the file that Ellis found in the basement connects to anything thus far shown.  The other two detectives in the second episode seem to be throw-away characters yet a good bit of episode two is based around their mundane questioning of two witnesses.  Ellis seems to cry more than anything in the second and third episodes and she does so little in the first episode that she comes off as the most inane detective in a cop show.  All the episodes come off as melodramatic which is not surprising considering that the case on hand is boring and uninteresting, to say the least.  I wanted to give the web series a chance hoping that it would pick up but it hasn’t done so yet and it doesn’t feel like it ever will.

Technically speaking there are a handful of great things to be said about the series.  Julian Andre Thomas’ score for the series is the best thing overall.  It fits the show and elevates some of the more mundane aspects of the show.  Also, Tony Murima’s lighting and camera work at times are better than the show deserves but unfortunately the editing hacks to pieces some of the more effective scenes which should have been allowed to play out.  The editing and sound mix are the worst thing about the series.  The editing does a lot of odd cross-cutting that draws attention to itself (which it shouldn’t) and the sound mix is all over the place because they never bothered to ADR sound when it was definitely needed which brings the overall production value down lower than it already is.  I won’t say much about the acting other than it’s not really there and this is to be looked at upon the entire cast, most of whom are miscast or have never acted as a police officer or seen a police procedural.  The same can be said of the writer(s) in which half the police officers’ mannerisms and etiquette seem either from the ‘80s or far removed from modern times (or just plain wrong).

Not sure if the show is trying to be a police procedural, a melodrama, a paranormal investigation, or a familial drama but the tone is all over the place and no episode can make a final decision.  This here lies the biggest problem with the web series which is, “who is the audience for the show?”  It came across my desk and I thought it was a paranormal police procedural but after three episodes I still have no idea what it wants to be and I don’t plan on waiting for more episodes to find out as I’m sure will be the response for most other audience members. 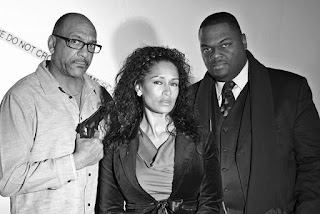 To watch “Clairvoyance: The Ellis Files” go to https://www.youtube.com/watch?v=D3aQHWxbhxI
Posted by Kevin L. Powers at 3:45 PM