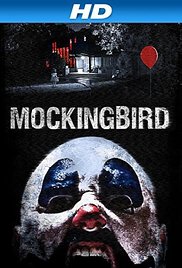 I kind of expected something more from producer Jason Blum but the film Mockingbird (2014) does follow into the footprints of many of his other films like Sinister (2012), Insidious (2010), and The Gallows (2015), to name a few.   Mockingbird follows a couple, a woman, and a geek shut-in who have been forced into playing a sick game by an unseen person.  They are given cameras that do not turn off and forced to film everything that happens to them or they will die.  Now this might sound like an interesting idea but the execution has a lot to be desired.

The geek shut in is the only person who actually enjoys what he is told to do by the unknown “puppet master” because to him it is a game and that he has a handful of tasks that he must do over the course of the night in order to win, namely dressing up as a clown.  Because it’s a Blum production, the found footage aspect of the film works better than in most.  The story is by Bryan Bertino and   It’s also competently directed with some creative production touches but is otherwise an uninteresting film.
Sam Esmail (with the screenplay written by Bertino alone who also directs).

I actually wanted to like the film as it had an interesting concept of people being forced to do things that that otherwise wouldn’t do but none of the characters are interesting so I kind of tuned out after a while.  Easily one of Blum’s lesser films but he’s produced enough found footage films that this one can easily be overlooked.
Posted by Kevin L. Powers at 1:56 PM