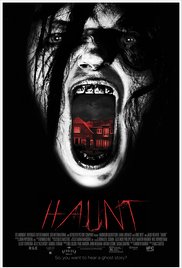 Evan Asher (Harrison Gilbertson) and his family have just moved into a house that holds a dark past and many secrets in the atmospheric film Haunt (2014).  Evan is an introvert who quickly makes friends with his neighbor Sam (Liana Liberato), who has her own secrets, but curiosity gets the better of them when Sam talks Evan into using a radio box left behind by the previous tenant to communicate with the spirit of a past resident.  Once they communicate with the dead there is no end to their curiosity no matter how dangerous their lives become as the mystery of discovering who the spirit was over powers them.

Written by Andrew Barrer and directed by Mac Carter the film is a well done haunted house feature which relies on atmosphere to create a sense of dread and menace.  Although there is nothing in this film that hasn’t been explored in previous haunted house films Carter does an extremely good job with the material and the two leads are really good together keeping you engaged from beginning to end.

This being said, it’s still just another haunted house story that hinges upon how much you love the genre.  The jump scares are prevalent and it is an effective film that does what it’s expected to do but not much else.
Posted by Kevin L. Powers at 12:51 PM