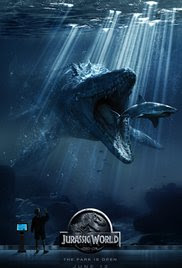 I would have loved to have said that 2015 was a great year for the horror genre, but sadly it was far from it.  2015 was a bad year for traditional horror films unless you were producer Jason Blum and the production costs for your films were so low that you couldn’t help but turn a profit.  Last year was a great year for non-horror, horror films which are all those films that have horror elements but would rather be action-horror (Jurassic World), animated-horror (Hotel Transylvania 2) or YA-horror (Maze Runner: The Scorch Trials) or comedy-horror (Goosebumps).  Remakes were shit and found footage films no one cared for (unless, oddly enough, your name is Shyamalan) and no one wanted to see sequels.  Here’s a play-by-play of how I saw 2015 in the world of horror.

Jurassic World was the #1 grossing (action-)horror film with over $652.3 million domestically!  Some people loved the film but I thought it was mostly a rehash of the first two films done worse by two actors that had no on screen chemistry and the tired plot thread of putting stupid kids in danger (the plot of all the previous films).  Chris Pratt wasn’t given enough room to breathe like he did in Guardians of the Galaxy and the dinosaurs (which looked excellent in 3D) were the only reason the film wasn’t complete shit.  They should have stopped as The Lost World: Jurassic Park but now we are assured more braindead sequels to come.

Next up is Hotel Transylvania 2 (with $167.8 million domestically), which unfortunately I’ve not had the pleasure of seeing just yet.  I loved the first film and thought it was quite inventive but I didn’t hear much good about this film so I just skipped it.  That’s all that managed to gross over $100 million at the Box Office in 2015 which is a sad indicator of things yet to come over the course of the rest of the year.

Maze Runner: The Scorch Trials (with $81.7 million) was one of the few stand-outs of the year in my opinion as it took the adventure aspects of the original film and amped up the horror elements with its zombie-like carnage of terror.  I really enjoyed the first film and loved what they did with the sequel and hope that subsequent films are just as inventive with their horror elements.  Goosebumps ($79.3 million) did decent business but wasn’t a huge breakout film.  I must be one of the few people who have never read the books nor seen the original television series so I didn’t bother watching this film that looked like Jumanji with Jack Black.

We finally get down to our first real horror film which is The Visit ($65.2 million) which was M. Night Shyamalan’s return to great form as he not only managed to craft a suspenseful found footage film but also made audiences believe that he wasn’t done yet as a capable film-maker.  I for one enjoy most all of his films but audiences have been left with a bad taste after several of his prior films.  Also, because he produced the film himself with his own money with a budget of only $5 million, this became one of the big success stories of the year.  It also happened to be one hell pretty damn good film as well.

Insidious: Chapter 3 ($52.2 million) and the remake of Poltergeist ($47. 4 million) were big disappoints for different reasons.  Insidious had a lot to live up to because of the success of the previous two films but since most of the cast were not returning and director James Wan jumped ship to go do the Furious 7 film, new director Leigh Whannell was going to have a lot to do in order to make audiences come back; unfortunately, only the die-hard fans showed up.  The film was still financially successful but a disappointment nevertheless.  Like most horror film remakes, there was no reason for Poltergeist other than it was a beloved film that hadn’t been given the remake treatment yet.  This film arrived D.O.A. despite the star power of Sam Rockwell and Rosemarie DeWitt.  I enjoyed Insidious but hated Poltergeist.

Next down on the list is the better than expected The Gift ($43.8 million) which is a character based thriller that had many twists and turns throughout.  With only a $5 million budget this did excellent business and played well with audiences throughout its run.  This is one of my favorites of the year.  A different kind of gift was on display with the holiday film Krampus ($42.5 million) which got mixed reviews from audiences expecting another Trick ‘R Treat from director Michael Dougherty.  This film didn’t make any waves and was unfortunately quickly forgetten despite the fact that I enjoyed it quite a bit.

The suspense thriller The Boy Next Door ($35.4 million) did really good business for a film whose production budget was a meager $4 million but so did producer Jason Blum’s other film Unfriended ($32.5 million) except the former is not as well remembered as the later.  Unfriended had a budget under $1 million and had one of the best profit gains of the year of any film.  I thought The Boy Next Door was effective yet highly forgettable and enjoyed the hell out of Unfriended when I saw it on the big screen in front of packed audience.

The most beautiful horror film of the year award goes to Guillermo del Toro’s Crimson Peak ($31.1 million) but it’s gothic romance over horror vibe turned away many audiences.  Because of the budget of the film and the fact that this was built up to be one of the biggest horror films of the year, instead it became one of its biggest disappointments.  This is still one of my favorite films of the year that I believe time will shed a new light on for audiences.

Blum returned again with sequel Sinister 2 ($27.7 million) but this was a huge disappointment compared to the previous film and the hefty production budget of $10 million (high for a Blumhouse Production) means that this franchise is probably dead.  Another disappointment was the projected franchise starter The Last Witch Hunter ($27.4 million) which was one of the biggest box office duds of the year with a production budget of $90 million.  This was supposed to be a franchise starter and not a franchise killer.  I missed both of these last two films as I didn’t really care for the original Sinister film and Vin Diesel has starred in more crap films than good ones (i.e. Babylon A.D. and XXX) so I had no interest in his latest debacle (and neither did anyone else).

Another unneeded sequel arrives with The Women in Black 2: Angel of Death ($26.5 million).  Although an interesting concept the film should have been a stand-alone film rather than be forced to work within the confines of the original Woman in Black film.  Not a terrible film, but not a very memorable one either.  The same can be said for The Lazarus Effect ($25.8 million) which had a great cast and interesting concept that is blundered by being a CGI heavy slasher film in the third act.  Not a film worth seeking out as it borrows so much from the film Flatliners that it’s just better to go back and watch that film instead.

I might be a little biased since I come from the theatre world but I really enjoyed the low budget film The Gallows ($22.8 million) which was criticized not only for being a found footage film but also being predictable and unoriginal.  Unfortunately, it’s hard to be original with a found footage film as the market has been flooded with them but setting the film in the world of live theatre is why I liked it so much.  On a budget of only $100,000 this film was another huge financial success despite audience apathy.    This film was also produced by Blum as was Paranormal Activity: The Ghost Dimension ($18.3 million) which is the lowest grossing film of the franchise.  Advertised as the final film, it was presented in 3D but was only given a moderate release because it was released simultaneously on VOD which is still highly controversial to most theater chains, so it didn’t get as wide a release as previous films in the franchise and kind of died quickly.  I loved seeing the film in 3D but it lacked the punch of previous films in the franchise which were suspenseful because of what audiences didn’t see rather than what they did. 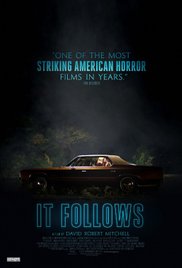 Another high profile (action-)horror film to arrive D.O.A. was Seventh Son ($17.2 million) which had a $95 million price tag and nothing to show for it.  It wasn’t all that interesting of a film and was quickly ignored and forgotten.

One of the most well received indie horror films It Follows ($14.7 million) almost didn’t get a theatrical release but when it did it found its audience.  The under $2 million production was a breath of fresh air from all the Hollywood horror films that just weren’t cutting it.  Like The Babadook a year before it, It Follows was the horror film that no horror fan should miss.  I loved the originality of the film and even though I didn’t think it was as good as The Babadook it was definitely one of the highlights of 2015.  The Green Inferno ($7.2 million) sat on a shelf for several years before finally finding release and unfortunately I didn’t get a chance to see it as yet.

Victor Frankenstein ($5.8 million) was another high profile box office dud that found no love from audiences.  I rather liked the adventure-horror film that was more The Mummy (1999) and less Mary Shelley’s Frankenstein (1994).  It was fun and exciting and had a great cast that really got the film that they were trying to make.  Not for the traditionalist, this version of the Frankenstein story owes more to Peter Cushing’s Victor Frankenstein from the Hammer franchise than from the book.

There are tons more films that were released last year but since I didn’t see any of them (yet) I can’t comment on them.  Instead, I’ll just list some of them with their domestic gross and keep in mind that many of these films received limited theatrical release at the same time as a VOD release.