It’s hard to pick on a film from the ‘60s as the visual FX are not as good and the plots usually pander to young audiences but if they have a charm then sometimes you can enjoy them regardless of all their faults which is how I look at Dinosaurus! (1960), a film I’ve always heard about but never really seen until now. 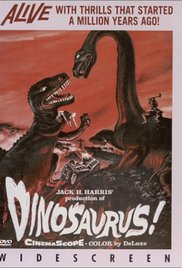 It’s a really simple plot as an underground explosion near a Caribbean island unearths the remains of two dinosaurs and a friendly Neanderthal Man.  Bart Thompson (Ward Ramsey) and his construction crew remove the bodies of the two creatures from their underwater grave while the unscrupulous island manager Mike Hacker (Fred Engelberg) finds the body of the Neanderthal Man and tries to hide it in order to make a profit.  During a nighttime lightning storm the bodies are resurrected by the lightning and the two creatures and Neanderthal Man run loose on the island.  The Neanderthal Man befriends a young boy by the name of Julio (
Alan Roberts) who helps them all put an end to the dinosaur menace once and for all.

Original idea for the film goes to Jack H. Harris and the film is written by Dan E. Weisburd and Jean Yeaworth who create a very kid friendly dinosaur adventure.  The film was definitely designed to appeal to the younger crowd but has enough adventure for the older crowd as well (at the time).  Although very dated, the film has a charm of innocence like that of the television show Land of the Lost and is something you’d now find on Saturday mornings for young children.  It’s more of a time piece for children from a by-gone era when dinosaurs were exciting and not as terrifying as they are in the more recent Jurassic Park films.
Posted by Kevin L. Powers at 8:21 AM