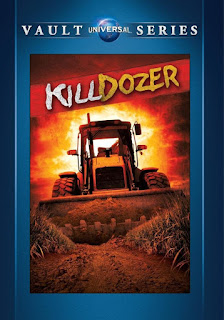 Clint Walker leads an all-star cast in the film KILLDOZER (1974).  When a small construction crew on an isolated island come in contact with a strange rock in the ground.  The spirit or energy force from the rock inhabits a bulldozer and starts to kill each of the construction crew one by one.  Walker plays Lloyd Kelly, the foreman of the construction crew just trying to keep his men in line despite the fact that he isn’t well liked by the men.  It is his job to try and keep his people safe and alive for as long as he can until help can arrive.

For a ‘70s TV horror film, KILLDOZER is very much like DUEL (1971) in its execution despite lacking the suspenseful elements that made that film so interesting.  Also, the concept doesn’t really hold up being a killer bulldozer which should make it very easy to escape but the film finds it easy for the men to get trapped and killed.

This is a film I’ve heard a lot about over the years and I see why it could have been viewed as one of the better made for TV movies of the ‘70s but that was a decade that had many great films on the small screen and even though this film was interesting there isn’t much that elevate it passed the nostalgia effect as it hasn’t aged nearly as well as DUEL.
Posted by Kevin L. Powers at 10:13 AM