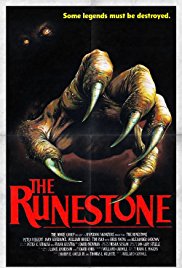 A Norse Runestone is discovered signally the coming of Ragnarok in THE RUNESTONE (1991).  It seems that Martin Almquist (Mitchell Laurance) has made a profound discovery with the Runestone and hopes to achieve his wildest dreams and desires until the Norse great wolf Fenrir shows up to cause chaos and disorder.  Now it is up to archaeologist Sam Stewart (Tim Ran) and his wife Marla (Joan Severance) to find the truth about the Runestone before it is too late.  With the help of the local police detective Fanducci (Peter Riegert) and Lars Hagstrom (William Hickey), a recluse who knows more about the Runestone than he’s letting on, its own a matter of time before Fenrir’s true purpose is made clear and no one will be able to stand in its way.

The film isn’t all that bad even almost thirty years later.  This is mainly because the performances still hold up very well and the concept isn’t all that bad even if the make-up and monster effects have aged.  The monster is seen a lot in the film as the film-makers are not shy about revealing the creature in all its glory.  I’m sure that in the early ‘90s the monster was impressive but anything has aged it’s this part of the film.  This being said there is a lot of violence and suspense so audiences will be entertained from beginning to end.

Written and directed by Willard Carroll (based on the novel by Mark E. Rogers) the film is very well directed despite the nature of the whole film.  The film is actually better than it should be as the comedic talents of Riegert are on full display and keep the film lively and interesting throughout the hokier moments.  Not a bad film from the ‘90s as there are plenty of worst options out there.
Posted by Kevin L. Powers at 4:30 PM