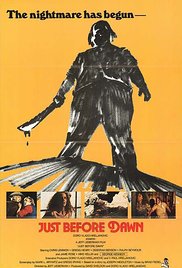 Five young campers are warned from going into the mountain wilderness by the local forest ranger Roy McLean (George Kennedy) in the ‘80s horror gem JUST BEFORE DAWN (1981).  The young campers are just trying to enjoy the weekend while also surveying the new property that one of them now owns but they soon run afoul of some locals and a killer that will protect and kill anyone that comes into his territory.  Now they must keep their wits and find a way off the mountain before they all become victims.

Jeff Lieberman directs and writes (with Mark Arywitz from a story by Jonas Middleton) this suspense filled horror film.  Lieberman’s other films include the popular SQUIRM, BLUE SUNSHINE, and SATAN’S LITTLE HELPER.  The film is very typical of other ‘80s horror films and has some creative kills but most memorable is the twist that comes halfway in the film that audiences aren’t expecting.

Kennedy is great as the “voice of reason” who tries to warn the campers and he’s given lots to work with as he returns during the third act.  Kennedy was a horror film fixture of the ‘80s with such cult films as CREEPSHOW 2, THE UNINVITED, THE TERROR WITHIN, DEMONWARP, and DEATH SHIP, to name a few.

JUST BEFORE DAWN isn’t one of the greatest horror films of the ‘80s but Lieberman crafted a film with ambition and therefore is an easily digestible time-waster.
Posted by Kevin L. Powers at 1:16 PM