FILM REVIEW: CREATURES FROM THE ABYSS (aka PLANKTON) (1994) 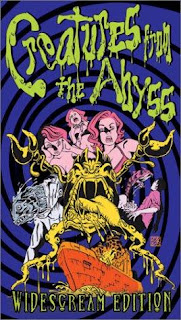 Five teenagers out for a night swim in the middle of nowhere get caught in a freak storm in CREATURES FROM THE ABYSS (1994).  They find shelter in a seemingly abandoned yacht which doubles as a marine research vessel.  As they wait out the storm, they soon discover that something else is on board the yacht with them which may have been the cause for the entire crew of the yacht to abandon the ship out in the middle of the ocean.

Now, unfortunately, this could have been an interesting concept but the film’s plot is flimsy as is the logic for most of what happens in the film not to mention that the monsters are laughable especially for a film from the mid-‘90s.   The film is written by Richard Baumann and directed by Alvaro Passeri (his first film as director before churning out such other great titles as THE MUMMY THEME PARK, PSYCHOVISION and FLIGHT TO HELL).  This is a pretty bad film even by pretty bad film standards.

There is nothing particularly imaginative or exciting about the film other than the attempt at body horror as the teenagers turn into strange contaminated fish monsters.  This is one aquatic horror film to avoid like day old sushi.
Posted by Kevin L. Powers at 4:37 PM