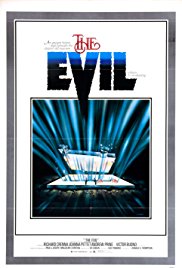 Richard Crenna leads an excellent cast in the horror film THE EVIL (1978).  Crenna is C.J. Arnold who is a professor who recently purchased a civil war era house in need of lots of repairs.  He assembles a group of old colleagues and students to help him restore the house but while exploring the basement of the house he comes across a doorway in the floor.  When he removes a cross keeping the doorway closed he unleashes an evil force that locks them all in the house with no means of escape.  The evil force decides that each person in the house is nothing more than a plaything at its disposal and C.J. and his friends must find a way out of the house before they are all killed.

As ludicrous as the concept for the film is Crenna has always had a knack for grounding these types of films such as DEATH SHIP (1980), DEVIL DOG: THE HOUND OF HELL (1978), NIGHTMARE (1974), LEVIATHAN (1989), and MURDER TIMES SEVEN (1990), to name a few.  He has a great supporting cast in Joanna Pettet, Andrew Prine, Cassie Yates, George O’Hanlon, Jr., and Victor Buono, to name a few.   The only main problem with the film is the fact that the female characters are not very fully developed (a product of ‘70s horror films) and make the film dated.

Written by Galen Thompson and Gus Trikonis, who also directs, the film is a very suspenseful thriller that has a mean streak in terms of how each person is killed making for a very entertaining film.  Only when the film delves into religious philosophy towards the end does the film misstep but this can be forgiven as there were many films of this era that tackled this question.  Otherwise this is a very interesting film.
Posted by Kevin L. Powers at 10:10 AM