After the Earth is struck by solar flares people suddenly disappear in the TV movie WHERE HAVE ALL THE PEOPLE GONE? (1974).  Steven Anders (Peter Graves) and his family are exploring the caverns on an archaeological dig when they are caught in an earthquake after the Earth is hit with powerful solar flares from the Sun.  It’s not long before Steven and his son and daughter (played by George O’Hanlon, Jr. and Kathleen Quinlan, respectfully) discover that everyone caught out in the open during the solar flares has been reduced to this white powder and only those immune are still alive.  Now they are a trip to get back home to discover the fate of their mother who was not with them when everything happened. 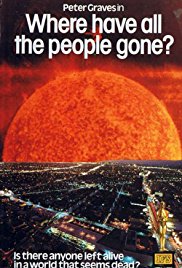 This is a road trip movie as Steven and his family discover what has happened to the world and how they plan on surviving in it as they meet other survivors both as companions in this new world and as a new type of menace where everyone is out to survive by any means necessary.

It’s an interesting concept that puts a modern-day science based look on a post-apocalyptic theme.  The film may lack the more gruesome elements of a typical horror film but it makes up for it with the psychological suspenseful elements, especially when the characters learn that the solar flares have made dogs slightly made and they must be careful what they eat and drink as some things have exposed to radiation.  It’s a film that speaks about the contemporary fears of the ‘70s while also producing an engaging film.

For a made for TV movie it’s not bad even if it has aged a bit in over forty years.
Posted by Kevin L. Powers at 1:19 PM