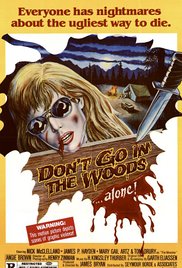 Written by Garth Eliassen DON’T GO IN THE WOODS…ALONE! (1981) is your typical horror film of the ‘80s…or at least it tries to be.  A maniacal killer is loose in the woods killing people for no other reason than he wants to.  The film is filled with card board characters that get dispatched fast and relentlessly but there is no main character that really draws you into the story and keeps you engaged.  It also lacks the fun and gruesomeness of a FRIDAY THE 13th or THE BURNING or MANIAC.

Directed by James Bryan whose other films include SEX ALIENS, WHAT EVER TURNS YOU ON, LADY STREET FIGHTER or BOOGIEVISION you can kind of get an idea of what you are in for.  Bryan doesn’t really direct a horror film but instead puts victims in front of the camera to be killed one by one in not all that original or creative of a way.

This is not a gem of the ‘80s horror boom but an easily forgotten misstep of straight to video fluff.  The most interesting aspect of the film is the original one-sheet poster.
Posted by Kevin L. Powers at 1:13 PM