Glen Ford is Colonel Pete Moore who is in charge of the Whitney Radar Test Group in THE DISAPPEARANCE OF FLIGHT 412 (1974).  During a routine flight exercise to fix bugs in their program his men of top pilots encounter something in the sky that they cannot identify or clarify.  When two fighter jets that were scrambled to deal with the situation go missing, the men of Flight 412 are transferred to a secluded military base where they are questioned by the CIA. 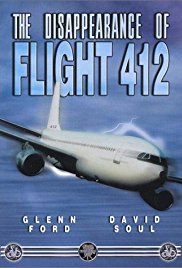 As Colonel Moore searches for the whereabouts of his three missing men, the missing men come to the slow realization that the sole purpose of the CIA’s intrusion in this government exercise is to psychologically force people who have claimed to have seen a UFO to dismiss their claims (or beliefs).  Now it is only a matter of time for Colonel Moore to find his men and discover the truth before the government has the time to cover up the whole incident as nothing more than a simple accident during a routine training exercise.

The psychological thriller is actually quite well done even by ’74 standards as it is more concerned with the psychology of the soldiers than with actually discovering the alien menace.  This is a film about the government’s methods in regard to UFO sightings within their own ranks.  The film is written by George Simpson and Neal R. Burger and directed by Jud Taylor. Taylor is a regular of TV movies such as BROKEN VOWS (1987), THE OLD MAN & THE SEA (1990), FOXFIRE (1987), LICENSE TO KILL (1984), MURDER TIMES SEVEN (1990), KALEIDOSCOPE (1990), and WEEKEND OF TERROR (1970), to name a few, and this fits right in there with them.  The film is a competently made thriller which forces the audience to ask themselves a lot of questions about the way our government policies are implemented within their own ranks.
Posted by Kevin L. Powers at 1:28 PM