Monsters come in all shapes and sizes but it’s a rare treat when it comes in the form of a mermaid or better known as a Nymph (2014) also known by its US title of Killer Mermaid (original title Mamula).  Kelly and Lucy (Kristina Klebe and Natalie Burn, respectfully) are two Americans on a Mediterranean vacation catching up with old friends when a trip to an abandoned military base turns deadly when they discover that someone is feeding a creature trapped in a well deep in the bowels of the structure. 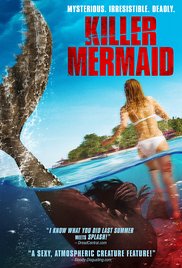 The closer they come to discovering the dark secrets that have been left hidden the more danger they find themselves in as Kelly and Lucy and her friends are picked off one by one not just by a deranged killer but also a creature that can lure men to their deaths while playing on their wildest fantasies.

Despite having a very predictable story structure there is great millage that comes from the exotic local and the actual location itself is rich with atmosphere and production value.  What could have easily been a derivative killer monster movie is something a bit more especially when adding in local legends and background in Nazi Germany (they always make for good villains).

Mina Sablic is the Creature otherwise known as a mermaid and she is represented in a very traditional way especially as a siren to call men to their dooms and to change into a deadly creature that devours them as well.  The only problem is that the CGI for the film is sub-par and laughable in many parts.  The first two-thirds do a good job of building up the film which is then rendered laughable by the CGI effects.  This aspect of the film will ruin it for most as most horror fans have grown tired of the bad CGI in films and therefore this film will be easily forgotten as well.
Posted by Kevin L. Powers at 3:46 PM