In general, I don’t particularly care for vampire films.  There are so few that actually have something to say and they’re filled with clichés and things that you’ve seen time and time again and even if the Twilight franchise has watered down their image there are just as many 30 Days of Night films that try to go in the complete opposite way.  Vampire comedies, in my opinion, fit even below the lowest of my expectations which is why it has taken me so long to get around to What We Do In The Shadows (2014).  I had zero interest in this film but due to the overwhelming great critical response to the film I decided to give it a chance and boy am I glad I did. 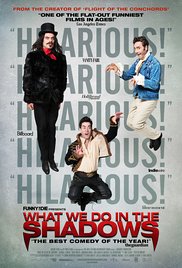 The film follows three vampire flat mates – Vladislav, Viago, and Deacon (Jermaine Clement, Taika Waititi, and Jonny Brugh, respectfully) whose lives are turned upside down when they decide to allow a film crew to film their lives as they prepare for the vampire party of the century.  The three vampires are trapped in their own time from when they were turned.  Living in the modern era has left them lost in time, but salvation comes in the form of a newly turned vampire who is up with the modern era but needs a little help with being a good vampire.

The film crew is given full access to everything and get to see and experience the day to day lives of vampires including their drinking habits, their animosity towards werewolves, and how they deal with vampire hunters.  For a film like this it covers a lot of ground while still being very character driven and funny at the same time.
What makes the film so successful is that the comedy is all character based and not bad jokes sprinkled throughout.  This film could have become a complete parody of itself but writer/directors Clement and Waititi do a great job grounding the film in the zany world of vampires.  Having the style of the film as a documentary goes a long way in allowing the audience to take the film seriously even though it is a comedy.

I ended up enjoying this film immensely as the story was easy to follow yet presented an almost “traditional” vampire story in a non-traditional way.  It had me entertained from beginning to end and even had some impressive visual FX to go with the story.  This film is one I highly recommend for both comedy and horror fans.
Posted by Kevin L. Powers at 10:11 AM