Contracted: Phase II (2015) begins where the previous film ends with Samantha England (Najarra Townsend) after her car accident and being confronted by police and she killing her mother in the streets.  The first film dealt with Samantha contracting a virus through a single sexual encounter.  That virus slowly turned Samantha into a blood thirsty zombie.  Phase II begins with Riley (Matt Mercer) whose brief encounter with Samantha has left him infected as well. 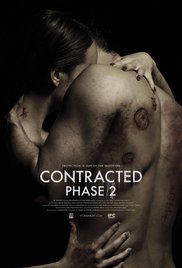 Seeing the chaos that has erupted around Samantha with the police investigation, Riley decides to find the person that infected her in hopes of finding a cure for himself.  As he succumbs to the slow decaying nature of the virus Riley learns that Patient Zero isn’t dying like he is and that there is more to his plan than just spreading the virus from one person to the next.

Unlike the first film which has a slow decaying Samantha and her descent into the undead, this film is faster paced and less of a character film as it is built around Riley finding the truth of what is going on.  He has to maneuver between a police investigation and discovering who Patient Zero is so this film has a completely different feel than the previous one.  This could be directly the result of a new writer and director behind the film (Craig Walendziak and Josh Forbes, respectfully).  This is not exactly for the best as the personal and character aspects of the film that made the original so unique are lost and therefore this sequel comes off as a predictable yet entertaining film.

This film may not be as cleaver as the first but it’s entertaining and a decent time waster as it could have gone worse.
Posted by Kevin L. Powers at 12:14 PM