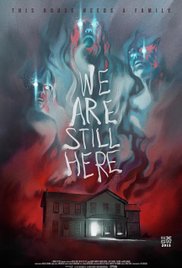 There are no such things as evil houses, just evil people, which is what we are always told but that is not the case in We Are Still Here (2015) which follows Anne and Paul Sacchetti (Barbara Crampton and Andrew Sensening, respectfully) who rent a New England home to get over the death of their child.  They’re not long in the house before they start experiencing strange things leaving them to believe that maybe their child has returned to them somehow.

Their friends May and Jacob Lewis (Lisa Marie and Larry Fessenden, respectfully) show up and they all decide to have a night on the town not realizing the strange glares they get from the locals.  It seems that Anne and Paul’s appearance at the strange house has been orchestrated and that they are part of a nefarious ritual that occurs every thirty years when the spirits of the house need to feed.   Now Anne and Paul must decide whether or not it’s more important to find a way to be with their child or survive the fate that lies before them.

The film has a very interesting premise and a great cast but it’s a slow burn with lots of exposition.  Unfortunately, this is one of those films that you actually don’t want to be a slow burn as it spends too much time on characterizations.  This being said the film has a fine cast and it’s always great to see Fessenden chew on the scenes.  It’s also another welcomed appearance from Crampton as well as a distraught mother who embraces the paranormal.  She’s been gone from the horror scene for far too long and it’s good to know that she’s back.

There are some great moments to be had in the film but it just takes its time getting there.  If you’re willing to take your time with the film then it will be worth it as the climax is a bloody good mess.
Posted by Kevin L. Powers at 6:00 PM