It’s rare that I come across a slow budget film that has no redeeming qualities to it.  Maybe the acting wasn’t as strong as it could have been or maybe the CGI was laughable but I could usually point to something that was good in the film whether it be the musical score or entertainment value or even the sex or high body count.  There is nothing redeeming about the film Avalanche Sharks (2015). 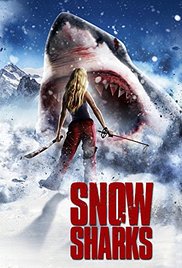 Besides having the most ridiculous plot I’ve seen in a horror film in quite some time this film wallows in the absent mindedness of film makers without an original thought in their head.  The film follows a bunch of random ski-heads at a ski resort during spring break.  Someone has accidentally released ghost spirits of the local legend of sharks that can swim through snow like it was water.  No one is safe and as people start to disappear the Mayer and local business owners refuse to close the mountain down in fear of scaring off the tourists and ruining the whole season.

Sound familiar?  It’s almost a plot point by plot point detail of Jaws and its other rip-offs except this film is filled with idiotic characters, racial stereotypes and whining and incompetent people in charge yet not really.  The film is also filled with too much bad CGI and even the makeup effects are sub-par.  Not one character is worth mentioning and the acting is beyond bad.  You hope that they will all die but some of them take too long for that even to happen.

This is a bad film even for bad films.
Posted by Kevin L. Powers at 6:02 PM