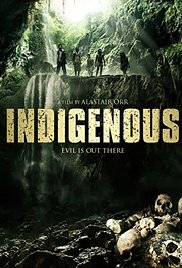 I generally love a good monster movie and even when it’s a clichéd premise in which tourists go into a house, forest, place, etc. that they shouldn’t have (and were warned against) and encounter a creature that picks them off one by one for no real good reason other than they stepped into the wrong place at the wrong time, I can still generally enjoy and be entertained.  This is the entire premise of Indigenous (2014) which finds some Americans in Panama on vacation to enjoy the beach and sun but when a local legend peaks their curiosity to a forbidden waterfall they set out into the jungle to see for themselves.

It’s not long before their guide is abducted by something from the jungle leaving the Americans without a way out.  Lost and alone they soon discover that their paradise has turned to a nightmare as they are hunted one by one by something in the dark that can hide behind every shadow and every fallen tree.

The film is extremely well done with a very capable cast but unfortunately there is nothing original or interesting in the film which is problem considering how much work went into pulling off a production which such high production values.  The third act does take some interesting and original turns especially when it wants to be relevant to our growing obsession with social media but I kind of wished that it had more of these types of ideas earlier in the first two-thirds of the film, which is a by-the-numbers monster film.

The makeup FX are pretty good but unfortunately don’t do much for crafting a satisfactory monster which is too human-like especially when it could’ve been something more special considering the exotic location.  Overall, the film is entertaining but not one you’ll bother to remember in the long run.
Posted by Kevin L. Powers at 10:00 AM