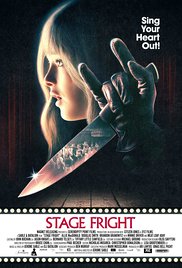 Stage Fright (2014) is a film I probably shouldn’t like since its part slasher film and part musical but all the elements come together in way that it crafts an entertaining and fun film.  Kylie Swanson (Minnie Driver) was killed during a theatrical performance of an original play and now years later at a theater camp the play that she was killed in is being resurrected and her daughter Camilla (Allie MacDonald) wants to continue in the role that killed her mother.

The problem is that people keep coming up dead and soon everyone starts to believe that the camp is cursed.  Camilla must summon her own strength in order to come to terms with the legacy of her mother and to survive before she becomes the killer’s next victim.

The film has several entertaining musical numbers and some extremely high production values making this one of the few exceptional horror films to successfully mix horror, slasher, and musical genres.  Written and directed by Jerome Sable (with music and lyrics by Sable and Eli Batalion) this is a film made by film makers who love horror just as much as musicals and has managed to craft a film that utilizes both in a satisfactory way.

The film also excels in crafting a very good mystery by making sure there are enough red herrings to keep the audience guessing until the end.  If there is any gripe it’s that there isn’t enough Minnie Driver as it was interesting seeing her in a horror film.  Whether you’re a fan of musicals or not this is a film any horror fan may enjoy.