The film Blood Lake: Attack of the Killer Lampreys (2014) sounds about as exciting as the title is overly long which is to say that it is one of those sci-fi-horror films where the poster is more exciting than the film itself (which is a shame since the human monster on the cover is nowhere to be found in the film). 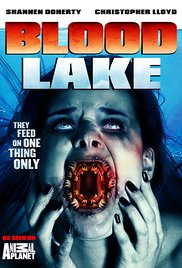 Written by Anna Rasmussen and Delondra Williams, Blood Lake is the story of a small town that is besieged by an aggressive lamprey population that kills everything in sight once they’ve chowed down on the fish population.  It’s up to the local police to find a way to rid their town of the lampreys before the population threatens to grow outrageous and dangerous to surrounding communities.  The film stars Shannen Doherty, Zack Ward, and Jason Brooks and has a guest appearance by Christopher Lloyd who all look like they wish they had never signed on to be in the film.  This (yet another) Jaws knock-off is filled with stupid characters that do stupid things but is mostly destroyed by the horrible CGI throughout the film.  No one and nothing is saved from the banality of this film that is neither entertaining nor contain the required large amounts of gore and sex appeal that appeal to the audience that even bothers with these types of absurd films.

Ward, who is so good in the absurdity of Postal (2007) and Resident Evil: Apocalypse (2004) plays the every-man type which goes against what he normally does so well in these types of films and Doherty has been completely domesticated as the matriarch of the family menaced by the killer lampreys.  This is a highly forgettable film with nothing for any audience and should be avoided.
Posted by Kevin L. Powers at 1:22 PM