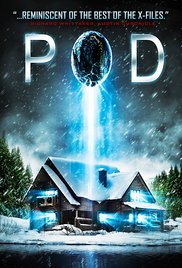 Martin (Brian Morvant) is out hunting with his dog when he encounters something in the woods that kills his dog.  He isn’t given much time to be shocked as something out of the woods attacks him and thus begins Pod (2015).
Ed (Dean Cates) and his sister Lyla (Lauren Ashley Carter) decide to go to their brother Martin’s house because Ed got a cryptic message from him.  Ed believes that his brother is in trouble and that it’s time for another intervention but when they get there they realize that Martin has completely shut himself in his house and has someone or something locked up in the basement.  As Ed and Lyla try to bring reason to Martin’s crumbling world they start to see and experience things that are abnormal and have them believing that Martin may not be as crazy as he first seemed and the thing in the basement is something unlike anything they’ve ever encountered before.

Written and directed by Mickey Keating, Pod is an interesting concept built around a family intervention and a possible alien and sci-fi premise.  The problem is that it’s just not an interesting film which is surprising considering that it comes from the Larry Fessenden camp who is reliable with indie horror films (he makes an appearance in this film as well).  The problem with the film is that the characters just aren’t interesting, which is a problem with a film that relies on its three main characters to carry the whole thing.  The biggest travesty is that Carter is under used in this film.  She’s such a commanding presence in The Woman (2011) and Jug Face (2013) that it’s a shame all she does in this film is wine and cry and play scared throughout the entire running time.

Pod is a film that had potential but instead ends up a mediocre time waster of which you will have seen better.
Posted by Kevin L. Powers at 12:05 PM