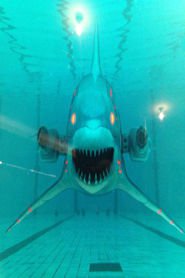 Something from an alien craft crash lands in the Pacific and comes into contact with a great white shark only to take its form as a Roboshark (2015).  Now that the alien has a form it attacks a submarine getting onto the bad side of the United States military that sees the Roboshark as Enemy #1 and they will stop at nothing to the kill the alien being.

Trish (Alexis Peterman) is a former weather girl just trying to catch a break as a real news journalist when the Roboshark story breaks and with the help of her daughter Melody (Vanessa Grasse) and husband Rick (Matt Rippy), who works for the sewage service they track Roboshark as it makes its way to an unknown destination.  It is Melody that first realizes that Roboshark’s intensions may not be as nefarious as everyone first thought and soon she and Trish are trying to save Roboshark before the military kills him.

Written by Phillip J. Roth and Jeffery Scott Lando (who also directs) the film is your typical alien-Roboshark movie except more fun.  The entire cast is in on the joke of just how ridiculous an alien-Roboshark is so they have as much fun as they can especially Nigel Barber as Admiral Black who will stop at nothing to kill the Roboshark.  The CGI is pretty god awful but everyone seems to be having more fun than they should and with a couple of drinks in hand so will you.
Posted by Kevin L. Powers at 5:57 PM