A young woman finds herself part of a long dead Nazi experience when she unwillingly releases a mystical elf into the world in Elves (1989).  Dan Haggerty is Mike McGavin, a down on his luck man who takes the job of being a department store Santa Claus after the previous one is mysteriously killed.  It’s not long before Mike is helping a co-worker trying to solve the mystery of why so many people are suddenly dying and who is the Nazi cult that keeps hanging around.
It seems that the Nazi’s are waiting for a Superior race to be born from the mating of an elf and a human and this is just the start.  Mike finds himself in the middle of this ageless battle which would be epic only there is only the single elf and he doesn’t do much other than hide.  The film itself is very uneventful and unfortunately the make-up effects are pretty bad.  Not dated but bad even for a film from the ‘80s.  There is also not as much blood and gore on display as befitting a ‘80s film so it has dated badly. 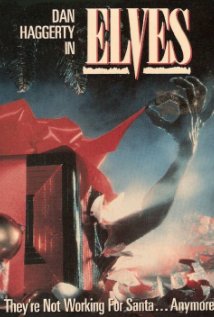 The film is written by Jeffrey Mandel, Mike Griffin, and Bruce A. Taylor and directed by Mandel.  Not a particularly exciting film but then again neither were most of the horror films from the ‘80s.
Posted by Kevin L. Powers at 5:10 PM