Even though I enjoyed the madness of the first two films in the series there is little to recommend in the latest film in director Tom Six’s infamous trilogy The Human Centipede 3 (Final Sequence) (2015).  Returning from the previous two films is Dieter Laser and Laurence R. Harvey but this time as different characters.  This time Harvey is Dwight Butler who works in a prison for warden Bill Boss (Laser).  They incompetently run one of the worst prisons in Texas and need something radical to change or they will both be out of a job. 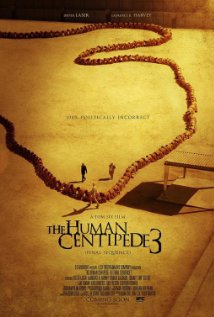 It is Dwight that suggests that they use something radical to get the inmates in line which is to take the “medically accurate” surgical monstrosity of the Human Centipede films and apply it to the prison system.  It takes a while before Bill can be convinced but ultimately the wheels are set in motion for all the prisoners to become the ultimate “human centipede.”

If this film had played everything seriously it probably might have been a better film. Instead, it repeats what had already been done well in the previous film (with the main character thinking the original Human Centipede film was just something to fantasize and copy) by making both of the first two films something to copy.  Laser is a caricature from beginning to end and you can never take anything he says or does seriously which does the film a disservice.  The film and the franchise has de-evolved into a parody of itself and its hard to enjoy a film that took such an innovative idea and is now making fun of itself the way this film has done.