The comedy Ghost Team One (2013) straddles the fence of being both a comedy and a found footage horror film as it takes two hapless twenty-somethings who would rather drink and party than to do school work and try and get ahead.  When one of them has a paranormal encounter during one of their parties they decide to put together their own paranormal investigation.  Sergio and Brad (Carlos Santos and 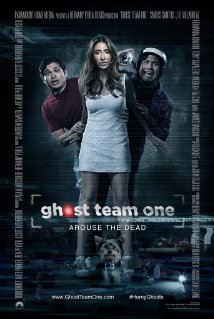 J.R. Villarreal, respectfully) are best friends whose roommate Chuck (Tony Cavalero) doesn’t take too kindly to their sudden interest in the paranormal and insistence that the house is haunted.

It’s not long before Sergio and Brad’s investigative team gets larger with an additional cameraman and Brad’s girlfriend Becky (Meghan Falcone) and Fernanda (Fernanda Romero), a very attractive woman who is more interested in the paranormal than they are.  Soon all kinds of crazy things start to happen as Sergio begins to fall for Fernanda while Brad has his first sexual encounter with a ghost.  It’s not long before the group discovers that their house used to be a brothel and that several people died in unusual circumstances.
Written by Andrew Knauer and Arthur Pielli the film balances the comedy well with the suspense of a found footage horror film without delving into a complete spoof.  The entire cast manage to keep their characters genuine and realistic in the face of the paranormal and unlike in the Paranormal Activity films the haunting is not nearly as nefarious.  This film could have easily fallen into the spoof (i.e. A Haunted House) territory but it manages to keep the comedy character based rather than joke based.

Overall, this isn’t a bad film but if you’re looking for something that is either a comedy first or a horror film first then this is definitely not for you.
Posted by Kevin L. Powers at 5:15 PM