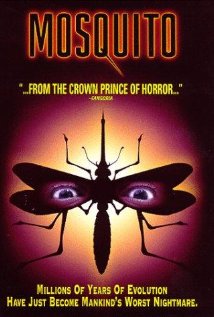 Strange things can happen in a giant monster film of which the Gunnar Hansen starring film Mosquito (1995) is but one.  An alien craft crash lands in the swarp and a horde of mosquitos feast on the alien body that has fallen out of the craft.  Feasting on alien blood causes the mosquitoes to grow enormous and their appetites along with it as they kill everything in their paths.  Earl (Hansen), his brother Junior and cousin Rex (Mike Hard and Kenny Mugwump, respectfully) are bank robbers who find themselves trapped between freedom and the killer mosquitos.  If Earl and his partners want to survive the night they’ll have to team up with a couple of young forest rangers who have also managed to find themselves on the dinner menu.

This is a classic big bug movie in which a lot of people die and the practical makeup effects outnumber the CGI ones.  This is a very old school style of film and with Hansen at the helm I wouldn’t have it any other way.  Now, the giant mosquitoes are never convincing but boy is the movie fun in a retro ‘90s creature feature kind of way.

I also enjoy this film more than I probably should because I’m a fan of Hansen’s and as usual he always seems to have a fun time regardless of the overall quality of the film.  The film is the debut feature from director Gary Jones who would go on to other giant creature features Spiders (2000) and Crocodile 2: Death Swamp (2002).  Neither of those are nearly as fun as this one.
Posted by Kevin L. Powers at 5:51 PM