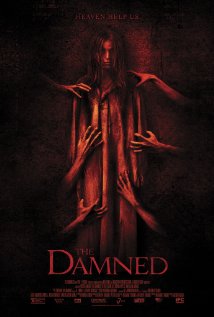 David Reynolds and his fiancée Lauren (Peter Facinelli and Sophia Myles, respectfully) have traveled to another country to pick her his daughter Jill (Nathalia Ramos) for the wedding when their trip turns tragic in The Damned (2013).  After their car crashes during a freak rain storm David and his family along with Jill’s boyfriend and aunt make their way to an isolated home that at first looks abandoned but soon they realize has a single inhabitant Felipe (Gustavo Angarita) who wants nothing to do with the travelers and warns them not to venture too far once he does let them into his home.

It’s not long before they all realize that something is wrong when they notice the home in complete disarray.  It is Jill who first hears the cry of a little girl in the walls and after some digging they realize that Felipe has his young daughter locked up in the basement of the house.  When they let her out strange things start to happen and soon they realize that there was a reason for the young girl to be locked up least of all the fact that she doesn’t seem to age despite the fact that she should be well into her forties.  Now David must do everything he can to protect his family as they are torn apart by an uncontrollable force that will stop at nothing to kill them all.

Facinelli does a great job anchoring the whole film as he has the most experience having starred in Supernova (2000) to The Scorpion King (2002) to the Twilight franchise, among others.  The entire cast does a great job as well.  This film plays it straight and dead serious from beginning to end and is never excessive.  Production values are very high especially when it comes to the isolated hotel.  Director Victor Garcia does a great job crafting suspense and dread in a house that seems too decay before your very eyes.  He is definitely a talent to look out for in the future.
Posted by Kevin L. Powers at 6:01 PM