Ritchie is probably the best worst thief in the world and when he’s hired to steal a prized cross from a Russian hotel he jumps at the opportunity to finish an unpaid debt but even that gets Botched (2007).  When Ritchie (Stephen Dorff) gets to Russia he is forced to work with two brothers whom he can’t trust and are unpredictable.  When someone is killed during the heist they escape with a group of hostages by going to an abandoned floor of the hotel and waiting for the cops to make their move. 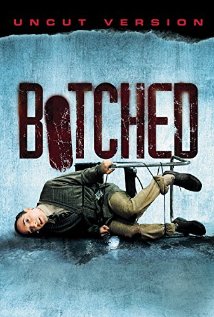 Unfortunately for Ritchie the cops are not coming because the building is owned by a sadistic brother and sister that decide to kill and massacre Ritchie and his friends and the hostages.  Now Ritchie must find a way to finish the job and find a way out of the building before the sadistic siblings kill him.

Written by Derek Boyle and Eamon Friel and directed by Kit Ryan this is an interesting mashup of horror and comedy that works because the situations that Ritchie keeps finding himself in seem to simply be a case of bad luck and that as ludicrous as the situation and characters are it all seems natural to the story being told.  It may seem like a simple crime thriller but there is enough blood and gore to satisfy the horror fans.

Dorff is an underrated actor because he’s done so many small thrillers and horror films such as The Gate (1987), Blade (1998), Alone in the Dark (2005), Cold Creek Manor (2003), and Feardotcom (2002), to name a few, that many people forget what a versatile actor he can be.  Here he displays charm as Ritchie that makes you root for him despite the tremendous bad luck that he seems to have.  A film I recommend.
Posted by Kevin L. Powers at 6:05 PM