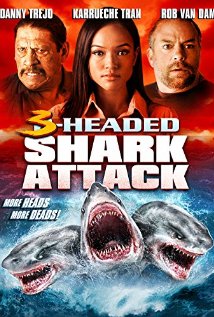 Written by Jacob Cooney and Bill Hanstock and directed by Christopher Douglas-Olen Ray (who also directed 2-Headed Shark Attack) this is a too-standard story of a mutated shark killing everything in its path from beach blonds to stupid scientists.  A research facility lead by the altruistic scientist Dr. Nelson (Jason Simmons) and his assistants of which Maggie (Karrueche Tran) is but one of the most promising.  When their lab is attacked by a mutated 3-headed shark those that survive the initial attack try to get to safety as fast as they can but is as always the case more obstacles are thrown in their path.

If the film didn’t follow a standard plot from beginning to end then it might be passable despite the ridiculous SFX and bad acting.  No.  It’d still be a bad movie and not even a cameo by Danny Trejo in the last act can save this film.  Don’t get me wrong, Trejo makes the most of what he is given but it isn’t much and this isn’t anything that you haven’t seen before in a Syfy Channel film.

What is really a shame is that all this effort goes into these bottom of the trash bin films when with just a small bit of effort in the script and acting departments and this film could have achieved something more.  Not much more but a little.
Posted by Kevin L. Powers at 5:05 PM