As part of my growing involvement in watching live shows in 2015 I must say that this is where I fell flat on my ass.  I always intended to watch more plays and go see more live events since as a lighting technician I work on so many productions every year.  Unfortunately, I only ended up watching and attending five live shows.  This is something I will definitely have to make up for this year going forward.

The most important thing about 2015 is the fact that I ended up going to theaters and venues I had never gone to before which means that at least I made an effort to do something new.  The most striking venue I visited in 2015 was Serenbe Playhouse (www.serenbeplayhouse.com) to see their production of “The Sleepy Hollow Experience.”  The venue does all their productions outside sans an actual stage.  The outdoors and the woods are their stage and the audience becomes a willing participant in the production.  This was an amazing production with great production values and an amazing cast.  The story is a universally known one but they put on an amazing presentation.  After seeing this production I will definitely look forward to what they craft for the rest of their current season and into the next.  This was a highlight of the year for me.

Moving onto another new venue was my experience seeing the acclaimed production of “Proof” at Out of Box Theatre (www.outofboxtheatre.com).  Although a small venue the intimacy of the production played well in the venue and the cast did a great job.  It’s definitely a great venue to look out for as they do some very interesting plays for a small Atlanta theatre.  Another venue I plan on visiting this year.
At Horizon Theatre (www.horizontheatre.com) I had the opportunity to see their production “Informed Consent”.  Although a typical production of the venue, they continue to put a lot of great production value in each of their productions.  This was another well done production although not as exciting as “The Sleepy Hollow Experience” or “Proof”.

Next I headed over to the Red Light Café (www.redlightcafe.com) for their Christmas themed “Tease Tuesday Burlesque” show.  This was the first time I’ve ever seen a burlesque show and this one didn’t disappoint despite being more rated PG-13 than NC-17.  The great thing about this show was the fact that it was a bunch of individual performances of both the burlesque and spoken word poetry and even had a couple of dance performances.  And it was made even better with a special appearance from Santa Claus and Krampus who hosted the event.  If you like burlesque and spoken word then you can catch this show once a month and it’s different each time you go. 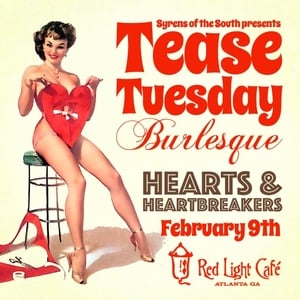 The last show I saw was probably the best with was “Craig Ferguson’s The New Deal Tour” at Cobb Energy Center (www.cobbenergycentre.com).   I never really watched his television show before it went off the air but he’s one of the funniest people I’ve ever seen live.  I was on the floor laughing almost the entire show and recommend this show for everyone.  Ferguson interacts with the audience creating a very personal experience that few comedy shows achieve.


I may not have seen many shows in 2015 but the shows that I did see were well worth it.  More importantly I have to ask myself why I didn’t see more live shows since all the ones I did see were pretty damn good.  If you don’t go to live events then this is a good year to make a change and explore some of the great venues and shows out there.