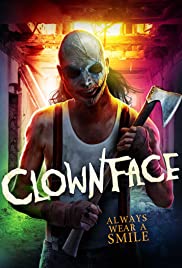 The clowns have come to engage a small town in the film Clownface (2019).  There is a legend or myth about a serial killer that wears a clown’s face and stalks the night.  Unfortunately, for roommates Jenna and Zoe (Hannah Douglas and Dani Tonks, respectfully) they are about to learn that there is truth to that legend.  When Jenna goes out to party one night leaving Zoe and her boyfriend Rick (Thomas Loone) to have their own fun, she returns home to see her best friend gone and Rick’s body mutilated.  Jenna claims that the infamous Clownface (Philip John Bailey) is responsible, but others do not necessarily believe her.

On the one-year anniversary of  Zoe’s disappearance and the murders renewed interest brings this trauma back to light, Jenna is hounded by an old friend Charlotte (Leah Solmaz) trying to pry the truth from her and the sudden appearance of Owen (Richard Buck), a man with his own traumatic experience linked to Clownface who wants to prove that the monster is real and that Jenna’s friend Zoe may, in fact, still be alive but a captive of the serial killer.  Jenna does not know what to believe but all of this has put her on edge, and she must decide how to confront her trauma and Clownface before it is too late.

At the same time, Zoe who has been a captive of CLownface for the last year is trying her best to find a way to escape her prison before Clownface makes her his next victim.

Now, first off, there are a lot of problems with the film the first of which is the fact that since there were no witnesses to Rick’s murder and Zoe’s disappearance how would anyone know to blame it on Clownface?  This plays heavily in the fact that there are those who believe Jenna and those who believe that she is hiding something.  Another problem with the film is the fact that the audience never knows why Clownface does what he does.  He kills some people (in horrendous ways), captures others, and just maims still others.  There does not seem to be any consistency to his motivations or actions which becomes frustrating to watch at times.  The pacing of the film is all over the place mainly because there are so many flashbacks which stop the story instead of pushing it ahead as it simply just provides needless background info.

What the film gets right is the lead performance of Douglas who easily overshadows everyone else as you believe she was fully engaged in the film from beginning to end.  Other than some rough spots in the end (where the focus shifts to other less interesting characters), Douglas’s Jenna is engaging and interesting mostly due to the actor’s commitment.  She does an amazing job lifting the film over the rough spots.  I also want to give kudos to the Hans Michael Anselmo Hess’ music score which elevates the film higher than it needs to be but does a tremendous job with keeping the film focused on the fact that it is still a horror film when there is so much drama contained within.

Written and directed by Alex (The House of Screaming Death) Bourne this could have easily been a film without the killer having a clown’s face as it doesn’t really add anything to the overall film as Clownface does nothing other than stalk and slash.  It is a concept not fully realized, but visually makes for more of a Leatherface type of killer.  Horror fans will enjoy the big bloodbath ending (!) and anyone with coulrophobia should make sure to stay clear away.