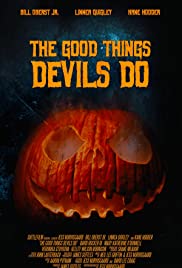 Original Title of Article: “Vampires Hand Delivered to Your Door in THE GOOD THINGS DEVILS DO!”

Demonic vampires are the scariest thing this Halloween in writer/director Jess Novisgaard’s The Good Things Devils Do (2020).  Small time crook Richard and daughter Mouse (Bill Oberst Jr. and Mary Katherine O’Donnell, respectfully) have been hired to do a small and simple job on Halloween night which includes breaking into the house of school teacher Professor Melvin (David Rucker III) and his wife and step-daughter (Linnea Quigley and Kelley Wilson Robinson, respectfully) and stealing an undisclosed amount of money contained within.  What should have been an easy breaking in and stealing job turns into a nightmare when a package Prof Melvin ordered for Halloween turns out to be a coffin with the corpse of a vampire.  When Melvin’s wife Louise mistakenly removes a table leg from the bones of the corpse the vampire-demon Masquerade (Veronika Stoykova) is resurrected and all hell is about to break loose.

Masquerade is a not a demon-vampire to mess with as she can control people with but a look causing Melvin and Richard to no longer trust their loved ones.  If the two men want to survive the night, they are going to have to put aside their differences and find a way to work together in order to destroy the vampire before she kills everyone.

Now, I am not really a fan of the vampire genre but I will pretty much watch anything with Linnea Quigley and Kane Hodder in it.  Hodder plays a hench man (sans makeup!) who does some really bad things.  I’ve also been catching more films with Oberst who is an indie film staple.  None of them disappoint as the film allows them all to get really nasty.  The film has some amazing makeup effects, and these are some undead and bloody vampires with some gory kills that will appease horror fans.  What I enjoyed the most was the fact that despite there was some typical vampire lore in the film, there was enough deviation from that to make the vampire Masquerade interesting especially in regards to how she controls people and uses them against one another.

The Story borrows its influences most directly from Joe Hill’s novel Heart-Shaped Box with the Melvin ordering a box containing a real vampire skeleton off the Internet but from there it becomes a gruesome and macabre film in which Richard will do anything to save his daughter Mouse and Melvin will do anything to save his wife Louise (the 40 year old stepdaughter still living at home he has less fondness for).  If there is a weak spot in the film, it is the way in which it tries too hard to be funny at times especially in terms of the stepdaughter Caroline, who is a 40-year-old dunce.

The film looks great and cinematographer James Suttles makes every shot look good and vibrant with color (I get the impression that someone is a little influenced by Dario Argento and his films).  This sets the film apart from other similar films as does the music by Neil Lee Griffin which perfectly helps set up the atmosphere.  Kudos to the cast and behind the scenes talent for helping to create a world that sells the film!

I must also say something about the great job with the makeup and special makeup effects of Faith Tramp and John Lauterbach, respectfully, which help achieve everything that the film needs to entertain and appease horror fans…even the ones who don’t really care for the vampire genre.