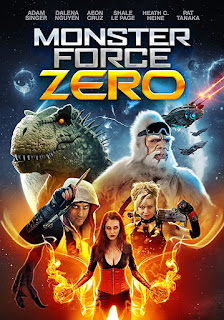 Original Title of Article: “Cosplay Goes Out of This World in MONSTER FORCE ZERO!”

Nathan Letteer directs a new type of Cosplay in the energetic and fan friendly film Monster Force Zero which elevates Cosplay to a whole different level!  Calvin Cashill, aka A.I., (Adam Singer) and his fellow comic book creators Ammorama and Kadabra Couture (Aeon Cruz and Dalena Nguyen, respectfully) are at a convention promoting the latest issue of their Monster Force Zero comic book when they are thrust into an outer worldly competition with a fellow Cosplay group of which the price is to gain supernatural powers in order to help two aliens defeat their mortal enemy.  Ana Unaki and Igigi (Silvia Taziri and Sly Clayton, respectfully) represent two alien races that need the help of humans in order to overcome their enemies Dr. Isolanda Eeche and her Consultant (Rachel Darden and Justin Cooper, respectfully) but first they need to know who is most worthy to wield their gift of supernatural powers and help them – A.I. and Monster Force Zero or Gunns Lazer (Heath C. Heine) and his team of misfits.

The first half of the film is a competition between the two teams in which they are in a race to grab icons that unleash their inner powers (or the powers their Cosplay character would have if they were real).  Once they have their powers it is game on in a battle for supremacy.  When one of them loses a battle they are sent to the penalty box or “janitor’s closet.”  After A.I. and his Monster Force Zero team succeed in defeating Gunns Lazer and his team they are sent on a mission to defeat the evil Dr. Eeche but nothing is what it seems as A.I. soon learns and he realizes that he doesn’t know who to trust which may endanger the mission.

Monster Force Zero is a love-letter to the Cosplay community as it takes what some see as a misunderstood community and gives it weight in an entertaining and engaging way.  The visual effects are actually really well done and the style is incorporated seamlessly into the Cosplay world of the film.  Although the film seems choppy due to the fact that there are two distinct halves to the film – one dedicated to the tournament between the two Cosplay groups and the second is the actual “mission” they are set upon, this plays well with the theme of the film in which the first half is a “game” and the second half is the “adventure.”  I actually found myself really enjoying the first half of the film more than the second as I loved the “game” aspect of the film.  There are also fun additions to the second half of the film including dinosaurs and Sasquatch (the less you know beforehand the better) which keeps the film (and audience) on its toes throughout!

I am not a Cosplay person but I can understand the allure of that culture and this film most definitely wants audiences to be immersed in this world enough to understand it and be entertained by it.  The cast does a tremendous job selling these aspects to the audience as they all know what style of film they are in and they know how to sell it (which at times makes for a very comedic film).  The film is also about teamwork and friendship which is also hallmarks of the Cosplay community.

Overall, Monster Force Zero is a great and enjoyable film for both audiences invested in Cosplay and those who (still) have no idea what it even is and it will entertain and take audiences on a unique and fun ride into a different “type” of world.