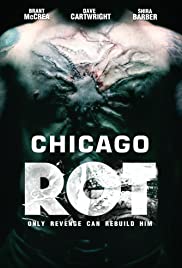 Getting vengeance has never been so fun (and gory) like in the film Chicago Rot (2016).  Wrongfully imprisoned  Les (Brant McCrea) has just got out of prison and there are a lot of people who want to see him dead among several gangsters and even the cops of which Detective Dave Simmons (Dave Cartwright) is but one who believes that Les killed his partner in front of his own eyes.  But there is more to Les than it seems as he is unable to die due to a pact, he has with a mysterious benefactor who wants to use Les for his own goals.  Les is an unstoppable killing force working his way up the underbelly of the underworld to Elion (Jonez Jones), whom also has his own secrets to shed.  The only thing keeping Les on the straight path is his girlfriend Alex (Shira Barber) whose been awaiting his release from prison for a very long time.  Now time is running short for Les as his enemies get closer even as the body count gets higher.

There’s an interesting mythology in the film involving Les who is know on the streets and the media as “The Ghoul” because he’s unable to die and he uses the flesh and blood of his victims to replace the damage done to his own body and there is a lot of it.  The one thing that may turn viewers off from the film is the way in which writers McCrea and Dorian Weinzimmer (who also directs) has mixed genres throughout the film leaving audiences uneasy throughout with some batshit crazy visuals and story elements.  To put the film in perspective, it feels like a typical knock-off of The Crow with Les’ The Ghoul seeking vengeance against those that have done him wrong and he does not necessarily control his own destiny.  The Ghoul dispatches his enemies with relish and carnage until getting to his ultimate challenge Elion (aka The Devil) and their battle is like a musical battle of the bands in LED technicolor.  This is not actually a bad thing as it gives the film a visually stunning and engaging pallet that was missing in the first half of the film.  The first Act may have been a paint by numbers revenge tale but by Act III you have been thrust into a whole other world which is also complimented with surreal dream sequences.  Those not willing to engage in the film’s more fantastic elements may be ultimately turned off but I found them more interesting and dynamic.

The one element of the film I least thought was successful was the overindulgence in violence as mostly committed by Les who is supposed to be the hero but comes off more like a sadistic thug.  Les does not really get the audiences empathy at any point in the story as he has committed such gory atrocities to be the villain himself.  It would be like watching The Punisher if he had no consequences for his actions and felt no sympathy through other characters so that audiences could empathize with his internal struggle.  None of that is present in Les and instead he comes off like a Snake Plissken if Plissken killed everyone that got in his way and indulged in seeing their pain as he did it.

This being said, I loved the musical aspects of the film as Weinzimmer does a phenomenal job incorporating the musical performances of Rachel Morgan as Calamity Jane with that of the visual musical cues (such as the final battel between a reborn Les and The Devil that’s edited like a battle of the bands).  This gives the film a unique feel and atmosphere unlike other similar films.  Especially note worthy is the Opening Credit Sequence!

Overall, there are some elements that distract from the film, but it also contains so much more than what you would expect from your typical revenge thriller.