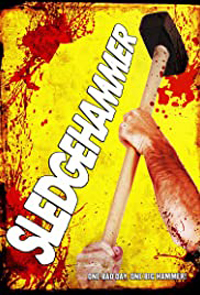 If there was ever a film about the dangers of drug use it would be writer/director Joshua Miller’s Sledgehammer (2017).  Yolner (Stephen Miller) is having a bad day.  He is late for work at a construction site because his car is out of gas and he must take the city bus, which he almost misses because the driver forgets to stop for him.  Also, his girlfriend Sibby (Samantha Green) decides to breakup with him over the phone because he is too boring and does not enjoy any of the things she does.

When two co-workers spike his coffee with drugs, he descends into anarchy thinking he is a Nordic God armed with a sledgehammer who must rid the world of generally anyone he comes across.  This leaves killer Yolner on a crazy odyssey of chaos and murder throughout the city with no one able to stop his carnage.

Now, on the surface this might be an interesting idea for a horror film like a warped version of Falling Down (1993) but unfortunately this film lacks all the elements that make that film so enduring.  Yolner is not a very interesting character as he is someone whom you think deserves everything that is happening to him and everyone he kills is so random and haphazard that they just come off as a simple body count of carnage similar to the violence seen in infamous director Uwe Boll’s Rampage trilogy (which I actually do not mind).  Unfortunately, this film decides that because Yolner is on drugs everything needs to be viewed through a drug induced state of CGI filled carnage edited to heavy metal music which if that is what you crave then this is perfectly suited for you.

If you have seen the Neveldine/Taylor directed Crank films then you know that this could have worked out to some amazing advantages but you kind of wish Miller had taken full advantage of the aesthetic. The over use in CGI backgrounds and use of black & white footage for no reason actually take away from the film as does as the side stories of random characters that are not established enough or given any type of back story before they are killed.  Yolner has a great gimmick in the sledgehammer as a weapon of choice and the fact that he comes from the construction job is also inspiring but  once he steps away from all that, the film descends into madness and not always in a good way.

Believable gore effects could have smoothed over the film’s rougher edges but that is lacking as it is done in a cartoony way that after the first few kills it becomes repetitive and less interesting and unfortunately Yolner kills a lot of people so you have to sit through a lot of extraneous cartoon violence.  It is like a Loony Tunes cartoon of violence and depravity which will appeal to some audiences.

One of the bright spots is the use of locations in the film as the sequence where Yolner chases three bike riders across the city streets is quite interesting as is the final sequence that takes place in a rock-climbing quarry.  Some of the film’s best cinematography is used in these sequences which makes you wish that the rest of the film were just as good.

Overall, the best way to truly enjoy this film is to be drugged just like Yolner, which may not necessarily be a bad thing after all.