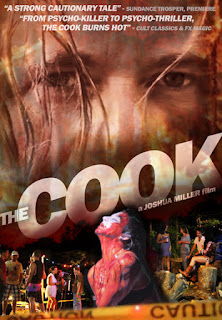 Original Title of Article: “Snake Handling the film THE COOK!”

Writer/director Joshua Miller’s The Cook (2017) is an odd mixture of backwoods slasher movie, drug movie, and religious cult thriller rolled into one.  When his younger sister is hit by a car during a drug infused meltdown, Jim and his other sitter Jena (Jeremy Castaldo and Ashley Pierce Davis, respectfully) hold a party in Morningside Park with a few close friends.  Unbeknownst to them, a religious zealot known to the locals as The Cook (Wade Blevins) is on his own crusade to rid the area of sinners wherever he may find them.   For those he deems worthy, he subjects them to an ordeal where death may be the only way out.  As Jim’s friends slowly disappear through the night, he comes to a personal dilemma of his own which involves his career as an actor in a successful TV soap opera and a possible new love interest Imogen (Amber Tranum), whom Jena does not take an immediate liking to.

People are sliced and diced in every direction and in increasingly gory ways (which should appeal to the gore aficionados) as The Cook makes his way through everyone he comes into contact with especially Jena and Imogen, who he takes a liking to and must ultimately see if they are worthy of his attention.  Jim may be the only one that can help them.

Now the film starts off with great potential as it has some really amazing cinematography at the beginning to simulate drug induced psychosis which plays into the theme later with The Cook who is suffering some type of PTSD from the way in which he was raised in a religious cult  that uses snake handling as a means to communicate with their God.  The Cook just uses what he learned in his upbringing in more morbid ways to decide who is worthy of his God’s attention.  This artificial psychedelic state is used throughout the film not only to show the mindset of characters (either induced via drug, alcohol, or religious means) but also to create suspense and unease in editing throughout the film.  At times, this works extremely well whereas when it has no purpose it makes the film fall flat.  This is most evident in the scenes when it is used while none of the characters are experiencing mental or psychological instability and when the POV of the video camera (or still camera or security camera) is used when none of that is within the scene; this type of artificial style takes away from the film as it seems out of place and just there for style instead of substance.  There is also an over reliance on over exposed daylight scenes which seem out of place (unless used as a POV for The Cook).

The characters are not uniquely drawn as the required group of backwoods hillbillies and stock slasher film fodder are very present but what does stand out is the well-executed makeup FX which will appease gore fans to no end.  There is a love for ‘80s horror films that is very present here which should entertain the hardcore horror fans and either leave you loving the film or hating it for all its apparent mistakes.