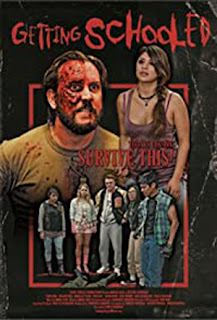 Original Title of Article: “Surviving Detention in Getting Schooled!”

Detention has never been so dangerous as in the film Getting Schooled (2017) in which Julie (Mayra Leal) and a bunch of her fellow classmates run afoul of a Vietnam veteran teacher with thoughts of murder on the brain.  Written by Chuck Norfolk (who also directs), Tim Norfolk and Steven Scott Norfolk this is a film that gives PTSD a whole different meaning.

The year is 1983 and after school detention is still in full swing where five students must pay the price for previous transgressions.  Mr. Roker (Tom Long) is a wheelchair bound teacher task with overseeing the students of detention which include the jock, the bad boy, the geek, and the princess (Jake Byrd, Roland Ruiz, Susan Ly, and Morgan Tyler, respectfully).  Mr. Roker has an accident in the head that prompting him to relive the trauma of the war. He soon believes that the students are his enemy and trying to kill him.  Now Julie and rest of the gang must find a way to escape the murderous intensions of Mr. Roper before they become a casualty of war.

On the surface, this seems like it is a mixture of The Breakfast Club (1985) and Cutting Class (1989) but despite never having a cell phone in sight, the film never feels like it is in the ‘80s even though Principal Vernon (Nick W. Nicholson) does in fact have an ‘80s phone.  There are some creative ‘80s horror film kills that will satisfy the gore fans, but the characters are never as savvy as those in The Breakfast Club making most of their dialogue scenes amongst each other nothing more than pandering drivel.  The film is best when Roker is killing people off and sprouting mad about his war memories.

What the film does get right in terms of ’80s slasher films is the sense that the characters are pretty much cannon fodder for the killer and rarely come off as anything more than caricatures of their stereo type which worked well in the ‘80s but in the ‘10s seem dated and out of touch.  What I did appreciate was the diverse casting (something the ‘80s were not known for) and there are a lot of great homages to ‘80s films.  I did enjoy the few instances that try to break the stereo type mold with having the Princess be a black belt and the bad boy actually have higher SAT scores than the Geek but these moments are few and far in between with a film more interested in maintaining the slasher film quota.

There are some logic issues with the film that will annoy audiences one of which is if the killer is in a wheelchair, why not just take the wheelchair away from him (which they get plenty of opportunities to do)?  Why do characters willingly go off on their own to do dumb things and get themselves killed off?  These are questions that ‘80s filmmakers and audiences didn’t need to answer but in the ‘10s it is something that must be answered, or it takes the audience right out of the world of the film.

I will say that the original score by Mike Fair fits the film perfectly and puts you right into that ‘80s slasher movie mindset and the practical effects look great (no CGI gore here!).  Also, infamous actor Ron Jeremy makes an appearance as Janitor Dan and has a great death scene!

If you’re a fan of ‘80s high school slasher films then you will find something to enjoy in this film.