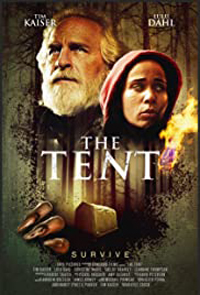 Original Title of Article: “Surviving a Post-Apocalyptic World in THE TENT!”

Post-Apocalyptic films can be tricky as filmmakers have to decide whether less is more (i.e. The Rover or Carriers) or to go all out (i.e. The Road Warrior or Tank Girl).  In terms of writer/director Kyle Couch’s The Tent (2020), the film goes for the less approach in order to focus on character.  In the film an event called The Crisis has devastated David’s (Time Kaiser) world and he has been forced to fend for himself in the woods while living in a tent of his own design.  He has only his wits and his own life lessons to keep him alive while a mysterious beast lurks in the woods and constantly watches him from the shadows.

Living alone in the woods has taken a toil on his psyche to the point where he is unable to comprehend memories from his past or the present.  When a young woman by the name of Mary (Lulu Dahl) helps to free him from one of his own traps, an unlikely partnership happens where she relies on the safety of David and his tent but is his tent truly a place of safe haven our a tomb to slowly die in?  David must decide his own fate while trying to help both survive from not only the beast outside but the monsters that David has created within his own mind that threaten everything he believes in.

There is a lot going on in the film in terms of themes about faith and the nature of evil both internal and external and sometimes they work and sometime not so much.  David’s mental balance is at the heart of the film as he must decide what is a safe place – whether to stay in the comfort of the tent that he has created for himself or to face his fears and the evils of the world.  Christian ideology is peppered throughout the film but is not overpowering.  The film could have worked better with more to strengthen that theme.  The same can be said for the monster which represents the “other” evils outside the tent more figuratively than physically which may be a huge turn off for horror and sci-fi fans.

The film wants to play with the conventions of the horror and sci-fi genres but never truly melds them to the overall story to satisfy the needs of either genre.  The film plays out more like a two person play about character than it does about anything else which may be a turn off for a lot of audiences expecting something much more.  This does not take away from what Couch is trying to say with the film, but his message may be a bit heavy handed especially in the final act of the film.

This being said, the film looks good from the art direction and cinematography (Andrew Doetsch and Robert Skates, respectfully) which makes David’s tent and the surrounding area look lived in and breathes life into images that rely on the two main leads.  Also, of note is the music by Pierre Vaucher which works wonderfully with the film.  Performances and dialogue at times can be wooden but it is all in the service of the overall story.

The Tent may not satisfy genre film fans but if you stick with it, there is a satisfying twist at the end that puts the whole film in perspective.