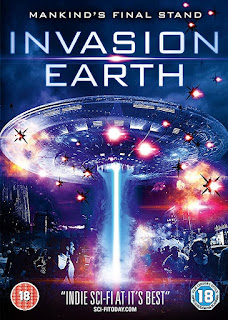 Original Title of Article: “Aliens Vs. Addicts in Invasion Earth”

Invasion Earth (2020) is the type of sci-fi film that will anger sci-fi fans but may appeal to those wanting a more character driven film with small sci-fi elements.  Both will probably come away disappointed in some way.

Dr. Carson (David Shaw) is a renowned psychologist who deals exclusively with troubled young people.  He has published several books to the chagrin of TV show host Pearson (Jon-Paul Gates), who has made it his mission to destroy Dr. Carson’s reputation.  Carson’s latest group of subjects are the who’s who of bad habits – a heroin addict, a nymphomaniac, an anorexic, a racist, and more, whom are all being forced to enter into his months long program or suffer going to jail.  Carson’s only ally is his right-hand man Thomas (Nigel Thijs), who has a military background and handles the things that Carson is unable to do.

Carson’s program includes taking his group to a secluded location and making them earn back their sense of worth and humanity by embracing their fears and insecurities.  This all sounds like a great lead into a drama with quirky characters that get into some shenanigans, but a dramatic comedy this is not.  Instead, this all happening while an alien invasion is going on all around them and once the aliens reveal themselves then this group of misfits must find a way to survive or escape the confines of the secluded clinic before it is too late.

Now, on the surface, this could be an interesting concept for a film.  Unfortunately, as written by director James Twyman, the film does not always know what type of film it wants to be.  The first two-thirds does a great job building and establishing the characters while in the background the occasional death via alien happens.  Then for no apparent reason the aliens possess one of the characters and then that character goes on a killing spree before being killed herself.  Then the aliens return to finish the job!?!  There is no real reason given why the aliens are hanging around for weeks on end while Carson’s group gets therapy nor why they would waste time possessing anyone when clearly they are shown to have the power to just zap people and objects from the comfort of space.

Night scenes are far too dark, but I am sure that was to hide the filming location whereas most scenes are over lit with the alien’s purple hue even when the aliens are not even around.  Most of the film starts to fall apart when there is an over reliance on trying to create the “alien menace” while characterization is sacrificed which is a shame since the film has very little suspense or surprise and it is the characters who make the first two-thirds interesting in the first place.   Often, this film feels like the low budget cousin of Signs (2002) just two decades too late.  Less is more as in this film the aliens look like something out of an S&M fetish store (or Hellraiser film) as opposed to an actual sci-fi alien film.

I am hard pressed to see how any audience will enjoy the overall film as it will leave you pondering all the missed opportunities of what it could have been instead of what it ended up as.